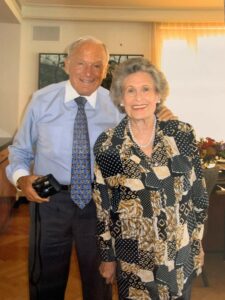 Marshall Bennett (September 19, 1921-October 13, 2018) was a pioneering real estate developer and broker of office and industrial property, advising institutional investors. He was an esteemed and effective mentor to many, imparting knowledge to, and making connections between, protégés, partners and colleagues. His efforts facilitated significant real estate transactions and groundbreaking developments nationwide. He was a person of great integrity, intelligence, curiosity, generosity, perseverance and kindness, and was always more interested in what he could give than what he could receive, and more interested in helping than being helped. Above all, he was loving to his family, his friends and most of all to his cherished wife, Arlene. Until shortly before his death, he was working for Middle East peace by fostering Israeli/Palestinian commerce, having traveled to Israel 46 times and worked with the Clinton Global Initiative on issues of obesity and healthy food for school children.

One of Marshall’s most pressing goals was to make a difference in the world. In 1980, he joined the board of the EastWest Institute, a global think-tank responsible for tackling tough international problems through diplomacy and problem solving. He also co-founded the Chicago Ten — a group of prominent Christian, Jewish and Muslim leaders in the Chicago area, to devise and promote economic-based solutions for peace in the Middle East. Marshall and Arlene had a lifelong commitment to philanthropy in the arts, medicine, culture and diplomacy. They supported innovation and philanthropy in both civic and global endeavors, including endowing a chair at the Chicago Symphony, a chair for brain surgery at Evanston Hospital and building Bennett Gordon Hall at the Ravinia Festival for young student musicians and performers. Marshall passed away on October 13, 2018 at his home in Chicago.

Arlene Bennett (March 16, 1927-April 15, 2020) was known for her extraordinary warmth, gracious demeanor, deep interest in others and generosity to family, friends and the greater community. She took great joy in her relationships with family and friends and was a legendary and beloved hostess at the homes she shared with her late husband in Chicago and Sun Valley, Idaho. As a couple, Arlene and Marshall were both renowned for their dedication to community and tikkun olam (repairing the world), a large and diverse circle of friends and their vibrant personalities and personal charisma. Arlene and Marshall were thoughtful and generous philanthropists, giving to causes that furthered important research in science, equity in education and access for all in the arts. Personally, Arlene was active with the Mary Lawrence Chapter of the Jewish Children’s Bureau, Misericordia, the Catholic-Jewish Dialogue, the University of Chicago Women’s Board, the Ravinia Festival Association, the Chicago Symphony Orchestra, the Weizmann Institute of Science, Hubbard Street Dance Chicago and more.

Arlene was born on the north side of Chicago on March 16, 1927, the second daughter of David and Jean (Meyers) Gettleman. She and her older sister, Laurie (Wallach), grew up in Rogers Park and attended Sullivan High School. Arlene went on to attend National College of Education, where she received a degree in early childhood education. In June 1948, she married Marshall, and together they had three daughters, Bija, Alice and the late Carole Hope. She passed away on April 15, 2020.