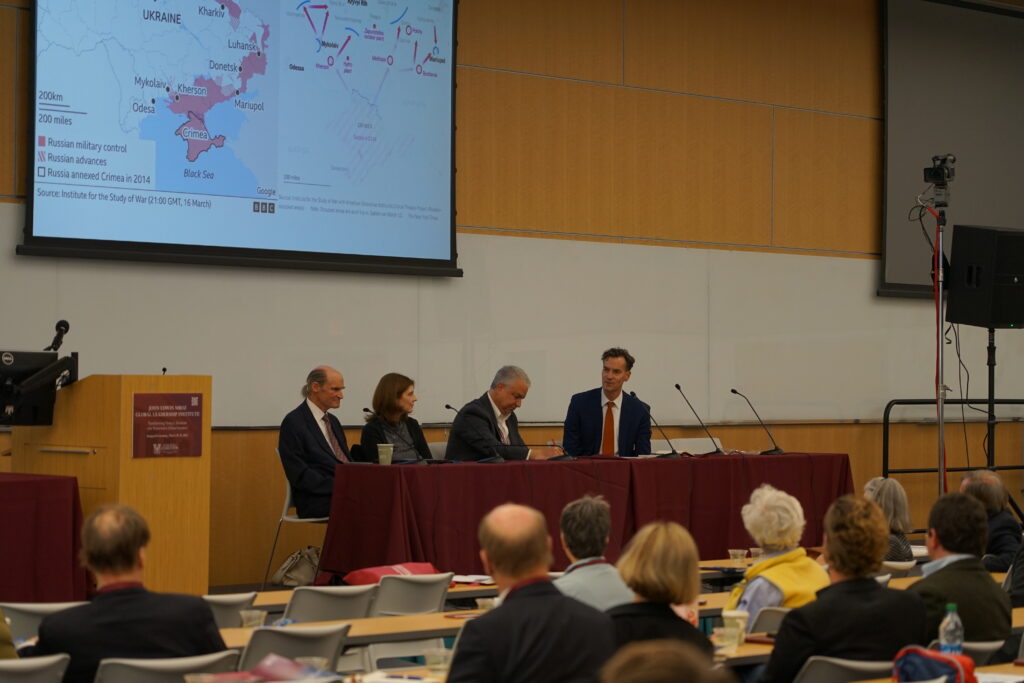 The Mroz Institute World Affairs Colloquium brings to the campus and community speakers with prominent international experience to address topics of world interest. In this series the School of Languages, Cultures, and World Affairs’ (LCWA) faculty and advisory board, as well as alumni of the EastWest Institute, invite prominent global citizens to present their life and work.

The World Affairs Colloquium stimulates discussions with students, faculty and the community as a part of LCWA’s mission to be the College’s place where disciplines merge, the realities of the world are confronted and where knowledgeable, engaged citizens of that world come of age.

Armed conflicts, public health emergencies, natural disasters, and other crises have been a recurring feature of human history. Since WWII, military conflicts among states have been rare but instrastate and civil wars have been more frequent. Since 2012, the number of instrastate conflicts around the world almost doubled. Similarly, the number of natural disasters in past forty decades quadrupled. These crises have led to losses of life and wealth, human displacement, and political instability.

Dr. Jamie Pow is a lecturer at Queen’s University Belfast. His research focuses on the way citizens interact with democratic decision-making, including through elections, mini-publics and referendums. This talk is co-hosted by Center for International Education and Mroz Global Leadership Institute.

Ambassador Dennis Ross is counselor and William Davidson Distinguished Fellow at The Washington Institute for Near East Policy. Prior to returning to the Institute in 2011, he served two years as special assistant to President Obama and National Security Council senior director for the Central Region, and a year as special advisor to Secretary of State Hillary Rodham Clinton. This talk is co-sponsored by the World Affairs Council of Charleston (WACC) and Mroz Global Leadership Institute.

The last three years have shaken the seeming stability of the post-Cold War and post-financial crisis period. The pandemic, war in Europe, tensions in Taiwan, accelerating climate change, food crisis, runaway inflation, and increasingly threatened democracies all suggest that we have entered a new crisis filled period. These crises are interacting to create both immense threats and an opportunity to re-think how we lead. In this talk, Dr. Izzo will explore how Dr. Izzo will explore how leaders, citizens, businesses and organizations adapt to meet these growing challenges. The new era will require a new kind of leadership as well as attention to the system itself that has accelerated these crisis.

John Izzo, Ph.D., a coach and friend of John Edwin Mroz, is a bestselling author and one of the most sought after voices on leadership. He has spoken to more than one million people, taught at three major universities, advised more than 750 organizations and been featured in the media by Fast Company, PBS, CBC, The Wall Street Journal, CNN and INC magazine. He is an Adjunct Professor at the University of British Columbia where he is co-founder of Blueprint, an NGO dedicated to a new model for men and masculinity.

James Creighton will explore the leadership lessons derived from his unique opportunity to design a nine-nation NATO brigade, build a multinational military and civilian team, and command what was designated as Combined Team Uruzgan. Combined Team Uruzgan engaged in counterinsurgency operations, combat, peacekeeping and nation-building activities.

Honorable James Creighton is a State Representative in the New Hampshire House of Representatives and the Chief Executive Officer for Eagle Point Global Solutions, LLC. He has coordinated and executed high-level discussions in Russia, China, Pakistan, India, Afghanistan, Turkey, Berlin, Belgium, among others. His book “Coalition Leadership: Combined Team Uruzgan, 2010-2011” will be published by the Marine Corps University Press in 2023.

Join us for a talk on democracy and democratic renewal around the world. Our guest is Damon Wilson, President CEO of the National Endowment for Democracy, a private, non-profit, non-partisan foundation dedicated to the growth and strengthening of democracy throughout the world. Prior to joining the Endowment, he helped transform the Atlantic Council into a leading global think tank as its executive vice president. Previously, Wilson served as Special Assistant to the President and Senior Director for European Affairs at the National Security Council helping to enlarge a Europe whole, free, and at peace; to secure freedom through NATO enlargement; to deter and counter Russian aggression; and to work with a united Europe as a leading US partner to support democracy in the world. This talk is a co-sponsored by the World Affairs Council of Charleston (WACC) and the Mroz Global Leadership Institute.

Ambassador Régibeau will discuss the US-EU relations and security challenges. This talk is co-sponsored by the Mroz Global Leadership Institute, the Department of German and Russian Studies, and the School of Languages, Cultures, and World Affairs.
Ambassador Régibeau served as the diplomatic advisor to the Minister of Defense from 1999 to 2002 and he went on to be First Secretary at the Belgian Embassy in Berlin. In 2016, he served as Ambassador to the Russian Federation, Armenia, Belarus & Uzbekistan. 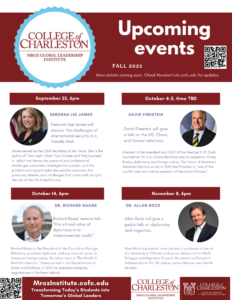 “The art and value of diplomacy in an interconnected world,”
Mroz World Affairs Colloquium Series with Dr. Richard Haass

Does the Vegas rule – what happens there stays there – apply to today’s world? Richard Haass’ answer to this question is “no.” He suggests that events outside our borders affect all of us and shape our understanding of the world. We cannot simply ignore the outside world. Dr. Haass will discuss the challenges of our interconnected world and the role of diplomacy in addressing these challenges.
Richard Haass is the President of the Council on Foreign Relations, a veteran diplomat, and a prominent voice on American foreign policy. He is a veteran diplomat and an established leader of nonprofit institutions.

US-China relations have deteriorated in the past years as the two states engaged in disputes about trade, human rights in Hong Kong, technological competition, security concerns in the South-China Sea, and the status of Taiwan. David Firestein will discuss the US-China relations and the prospects for the future.

David Firestein is the president and CEO of the George H. W. Bush Foundation for U.S.-China Relations and he is an expert on China, Russia, diplomacy, and foreign policy. The Voice of America’s Mandarin Service wrote in 2016 that Firestein is “one of the world’s best non-native speakers of Mandarin Chinese.”

In the next 20 years, our country and world will face unprecedented challenge and complexity. Changing climate, aging populations, disease, financial crises and technologies that divide more than they unite, are straining societies and governments. At the international level, the world will be shaped by China’s competition with the US and Western led international system, with a greater risk of conflict. Meanwhile, North Korea, Iran and terror will continue to threaten the US and our allies. How should the US and the international community address these challenges? Deborah James served as the 23rd Secretary of Air Force. She spent 11 years at SAIC, government technology contractor working on cyber security and technological innovations. SAIC has an office in North Charleston. She is the author of “Aim High: Chart Your Course and Find Success.”