Join us for a talk on democracy and democratic renewal around the world. Our guest is Damon Wilson, President and CEO of the National Endowment for Democracy, a private, non-profit, non-partisan foundation dedicated to the growth and strengthening of democracy throughout the world. This talk is a co-sponsored by the World Affairs Council of Charleston and the Mroz Global Leadership Institute. It’s open to members of the World Affairs Council of Charleston, CofC faculty, staff, and students.

What: Damon Wilson’s guest talk “Forging a Coalition in Favor of Freedom Around the World.”
When: 6pm, Thursday, January 27, 2022
Where: Arnold Hall, Jewish Studies Center (96 Wentworth St, Charleston, SC 29424). This is a live in-person event and masks are required during the talk. Space is limited. RSVP to join the in-person event http://shorturl.at/bhyHZ. We will also stream the talk via zoom. Register for live-streaming at http://shorturl.at/hqAQ7.

About the guest speaker: Damon Wilson is President CEO of the National Endowment for Democracy, a private, non-profit, non-partisan foundation dedicated to the growth and strengthening of democracy throughout the world. It promotes political groups, free markets, trade unions and other independent institutions. Prior to joining the Endowment, he helped transform the Atlantic Council into a leading global think tank as its executive vice president. Previously, Wilson served as Special Assistant to the President and Senior Director for European Affairs at the National Security Council helping to enlarge a Europe whole, free, and at peace; to secure freedom through NATO enlargement; to deter and counter Russian aggression; and to work with a united Europe as a leading US partner to support democracy in the world. 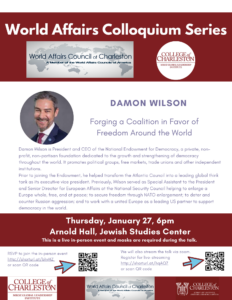