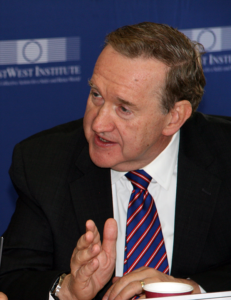 John Edwin Mroz was the founder and CEO of the EastWest Institute (EWI), an influential non-governmental research and policy organization that worked behind the scenes with governments involved in the Cold War, the Israel-Palestinian conflict, superpower relations between the United States and China and elsewhere.

Mroz was serving as director of Middle East studies at the International Peace Academy in 1981 when he was handed a Palestinian Liberation Organization (PLO) memorandum that made reference to the state of Israel and the right of states to live in peace — a central point of contention dividing Israelis and Palestinians for decades. Mroz contacted the Reagan Administration State Department, which then took the diplomatic initiative and established a contact with the PLO through Mroz. The substance of the talks between Mroz and Yasser Arafat was PLO recognition of Israel in return for U.S. recognition of the PLO. The efforts were aborted after the start of the 1982 Lebanon War. Mroz met with PLO leader Yasser Arafat more than 50 times over three years.

Though the talks did not succeed, Mroz established himself with officials in Washington, D.C., the Middle East and others as a reliable go-between, a faculty he employed throughout his career. The Middle East conversations also introduced Mroz to the late Ira D. Wallach, then head of Central National Gottesman, a marketer of paper and pulp products. Together in 1981, with Wallach as initial benefactor, they founded the Institute for East-West Security Studies. The Institute, based in New York City, focused its mission in the 1980s on addressing and helping resolve underlying conflicts in the Cold War.

In the 1980s and 1990s Mroz made hundreds of trips to the Soviet Union and its successor states, including Russia, Ukraine and other Central and Eastern European states. Moving quickly after the fall of the Berlin Wall in October 1989, Mroz opened a European headquarters in Prague and reinvented the Institute to deal with the full array of challenges associated with the post-communist transitions of Central and Eastern Europe and the former Soviet Union. His work covered political and economic reform and new arrangements of international security.

Recruiting a multidisciplinary and international staff, promoting leadership from the region and later opening satellite offices in Warsaw, Budapest, Kyiv and Moscow, the Institute adopted a new name to accompany its new mission — the EastWest Institute (EWI). In the late 1990s and early 2000s, anticipating the shift in global power, Mroz advanced the Institute’s reach to Central Asia and China. The institute’s May 2014 board meeting was held in Moscow during the global response to Russia’s annexation of Crimea.

EWI’s work concentrated heavily on efforts to establish a stronger and more positive U.S.-China relationship especially in the political and security arenas. EWI pioneered a rigorous focus on the global challenges of international cyber security, holding the first worldwide summit in 2009 in Dallas. Additional work focused on the challenges of food, water and energy. In 2014, Mroz chaired a panel on transatlantic relations at the 2014 Munich Security Conference.

Mroz received numerous international awards. In recognition of the role he and the institute played in facilitating German reunification, the Federal Republic of Germany awarded Mroz the Order of Merit or Das Verdienstkreuz 1. Klasse (Officer’s Cross), Germany’s highest award to a non-citizen. The presidents of Slovakia and Romania presented Mroz with the highest civilian awards given to non-citizens. In addition to his advisory work for the United States, Mroz assisted more than 20 governments including Germany, Turkey, Ukraine, Poland and the Russian Federation, as well as the G-8, the European Union, the African Union, NATO and the Council of Europe.

Mroz served as an active member of the Council on Foreign Relations and appeared frequently on BBC, CNN, ABC and other news programs around the world. He spoke regularly before business and professional groups including Institutional Investor, Fortune Global Forum, the Young Presidents’ Organization, WPO, CEO, the Russell 20-20, the International Chamber of Commerce World Congress, the Eurasian Media Forum, Davos and the World Future Society.

Mroz wrote a book on the Israeli-Palestinian conflict, Beyond Security: Private Perceptions Among Arabs and Israelis, and contributed to Foreign Affairs magazine and numerous other publications. EWI grew to become a major global policy organization, publishing articles and books, and with significant contacts in international business as well as government. This was reflected in the many distinguished individuals who served on EWI’s Board of Directors over 40 years, including:

Mroz was born in Lowell, Massachusetts and received his B.A. from the University of Notre Dame, followed by an M.A. at Northeastern University and an MALD at The Fletcher School of Law and Diplomacy. Through his work in conflict resolution, Mroz established himself as one of the leading voices in international diplomacy. Mroz passed away in 2014.

Since the founding of EWI, John Mroz’s wife, Karen Linehan Mroz, known for her work in children’s education and women’s empowerment in the Middle East, participated with her husband in the creation and development of the institute. She later served as a member of the EWI Board of Directors and its Executive Committee.